The nineteen forties were hard times for a great part of the planet’s population. Young men died by the thousands or perished buried under the ruins of cities that had been models of architectural beauty. The quick destruction of Europe coincided with the slow and cruel awakening of a recently war-ravaged Spain, subjected to a hybrid military and religious dictatorship whose repressive force reached the most distant corners of a country in which, once the unrestricted shooting came to an end, the inhabitants returned to their daily lives in an atmosphere of hunger and cold.

Miguel Zapata was born in 1940 in the city of Cuenca, an example of a remote, deprived and poorly communicated city whose practices, to the most insignificant, were controlled by the Catholic Church. He lived a happy childhood in that hostile barrenness, where religious faith took root strongly on the innocent youth, leaving a trace that throughout his career would manifest itself as beauty in a pagan recovery of sacredness in the form of art («Beneath my blotches one could feel a strange sense of religious confusion stirred by a vague whirlpool of social concerns», 1998). His first drawings bear witness of the dual influence he received: the arid land where the peasants toiled with their oxen, and the violent contrast of the Holy Week processions upon the polychrome facades of Cuenca

Extreme asceticism and blind faith exposed in bloody images of Christ or in chants and prayers for rain.

Endowed as he was with an extraordinary skill for drawing, he could not ignore that scenery as if it were something alien. He drew and painted many pictures in which the solid outline and a free brushstroke on a rough burlap base stressed the authenticity of his subjects: the hardship, suffering and loneliness of characters crossing the Castilian steppe or sitting in a bar in the twisted streets of the old city. This he did with surprising ease, without teachers or schools. One could say that he was born a painter.

In the mid-1960s, open to other horizons in Madrid, Barcelona and Paris, his work experienced substantial changes. Years of investigation in all cultural fields gave way to an understanding, interpretation and incorporation of other pictorial tendencies across the world. An adjustment to his roots, whose presence, despite the diversity of materials he gradually introduced, would always be felt. Religious processions sketched on board and enriched with wood and overlapping rags would be followed by series of Bishops and Cardinals whose volume and chromatic lusciousness encouraged the introduction of elements that jumping out of the surface looked as if attempting to establish a balance in the distribution of space, where a new geometry learned to coexist with the primeval patterns. In those inquisitive years he delved into the deep vacuum of abstraction, making with his own hands the giant paint-brushes with which he interwove the canvas with thick torrents of color, introduced metal sheets and old pieces of wood, or brought in some gleaming Cardinal, transformed into a dense texture, amongst fragments of Baroque bas-relief.

Brought in some gleaming Cardinal, transformed into a dense texture, amongst fragments of Baroque bas-relief.

Given the development of his painting, especially in those years of radical and sometimes desperate search of direction, its subsequent evolution is understandable and logical. The irruption of relief in his work could have been a sequel of his interest in the ancient Mesopotamian cultures, of the use that he made of bags and burlap in his beginnings, and of the paintings of Millares. In that sense, Velázquez, Masaccio and Durer, reinterpreted three-dimensionally «….will lend me their unconditional support in the form of a pictorial reference on which to operate with impunity.» A rich substratum linked to and fed by abstract expressionism proclaimed the emergence of the new language he would create.

His choice of the Cuatrocento as part of his language is not accidental, because Miguel Zapata was, first and foremost, a humanist in the full sense of the term. Conscious of the enormous implications of that period in the shaping of the ensuing European taste, he took that «pictorial reference» as a starting point. However, having matured in the resurgence of art from the ruins of the Second World War, he also incorporated contemporary forms of expression. In that sense he was aware that he had always known what he wished to paint. Spain has a rich artistic heritage that has not always been appreciated: ancestral manors and entire churches have been sold or left to ruin; extraordinary frescoes have been brutally and regularly pick axed to be newly plastered according to the dominant fashion, and rediscovered in later lootings in search of antique paintings. And what can be said of Italy and its unbelievable re-use, in Christian temples, of Roman ashlars covered with pagan inscriptions, the extraordinary displacement of thousands of columns, or the overlapping, the wear and abandonment of so many frescoes and bas-reliefs? In other words, the fusion of the Greco-Roman or the 15th century pieces with whatever time and human action have added to it is now a part of the aesthetic landscape of old Europe. The work was done, but was not represented as art. Miguel Zapata endeavored to create a language of great beauty that communicated two compartments, Renaissance and abstract expressionism, defined as hermetic in the classical academic tradition. There lies its originality: in the invention of a new language which opens a dialogue between characters or schools so distant in time, a language which, in turn, introduces a formal balance in the anxiety and disturbance that emerges from ruin, compelling the unsettling to coexist with the enchanting. 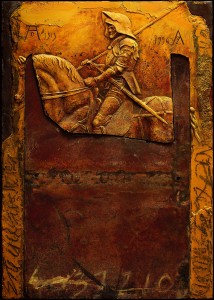 There lies its originality: in the invention of a new language which opens a dialogue between characters or schools so distant in time.

That is the language of Miguel Zapata. In the exquisite reconstruction he makes of the classical piece, he introduces fracture and destruction so that the sum total acquires its own unity and sense. Palimsests, archeomanies, dialectical investigations, wall relief paintings are some of the terms that critics have used to describe his paintings, because his work inhabits a unique area of the artistic realm, not related to the collage, and is neither only bas-relief nor only painting, but a synthesis between them. 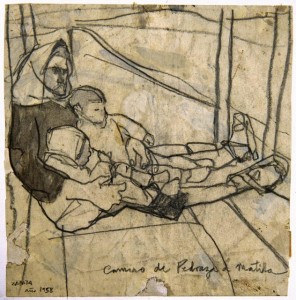 Miguel Zapata was, first and foremost, a humanist in the full sense of the term.

Until the mid-nineteen eighties the work he carried out in his studies in Cuenca and Madrid was acquired by individual customers and some institutions, mainly in Spain. When in 1985 the Meadows Museum in Dallas exhibited his work, which became immediately an object of public recognition, he settled in the Texan city, so distant and different from Cuenca, to initiate the serene and prolific second part of his life, in which he created some of the most beautiful works of his career, now assembled in private collections and museums in the United States. Given the warm welcome he received from his forthcoming Texan friends, he used to say, when seeing the Dallas-Fort Worth Airport from the airplane, «we are back at home».